Are fungi hidden drivers of plant distributions and population persistence?

Are fungi hidden drivers of plant distributions and population persistence? 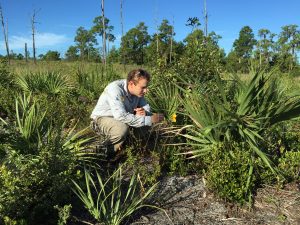 By now it’s become a well-worn phrase, but the fungal communities that inhabit soils are complex. Our sequencing projects reveal off-the-wall levels of diversity, including many un-culturable taxa previously unknown to science, that can vary wildly in their composition among samples. Yet, through all the noise, we have already learned a great deal about fungal ecology, and the next big areas of ecological research are taking shape. First, we are advancing our understanding of how fungi and other soil-inhabiting organisms facilitate the plant species with which they associate. Second, we’re developing a bigger picture of what these fungal communities look like across broad landscapes. Over the last few years, I have been tackling these issues in the Florida scrub ecosystem with assistance from MSA’s Forest Fungal Ecology Postdoctoral Fellowship.

The Florida scrub is a highly imperiled habitat endemic to the Lake Wales Ridge, a narrow ridge that runs along the center of the state. Within the ecosystem, the highly imperiled rosemary scrub occupies relatively high elevations compared to its neighboring, low elevation habitats like scrubby flatwoods and flatwoods. Of course, “high elevation” in Florida is extremely relative, and in this case, the small differences of 1-3m in elevation among habitat types makes a big difference for a plant’s ability to access the water table. Most interesting of all is the open sand gaps between the shrubs where a multitude of endangered herbs, mosses, and lichens (Cladonia sp.) are found. These species are fire-adapted, often depending on fire to germinate. Importantly, rosemary scrub fires reset succession, allowing local populations of small herbs like Hypericum cumulicola to boom before getting crowded out by the larger, ever-growing rosemary shrubs (Ceratioloa ericoides).

So where do the fungi come in? I, along with my former postdoctoral advisers Dr. Michelle Afkhami and Dr. Christopher Searcy at the University of Miami, hypothesized that fungi (and bacteria, too) were the unknown factors that allowed endemic herbs like H. cumulicola establish and prosper in rosemary scrub when so few plant species could. Importantly, we hypothesized that not only did fungi and other microbes benefit individual plants, but also plant populations. We conducted a series of bioassays that quantified the effect of soil microbes on critical vital rates of scrub species, namely germination and early seedling size. Then, we incorporated our experimental results into an integral projection model constructed from over 20 years of H. cumulicola census data to show that microbes underlie population persistence of the plant (David et al. in press, The American Naturalist).

Next, we wanted to learn more about the soil-inhabiting fungal and bacterial communities. In particular, we wanted a landscape-level look at microbial communities across several habitat types, including the endemic rosemary scrub. In 2017, we collected >600 soil samples from across the Florida scrub landscape at Archbold Biological Station. In an ambitious sequencing project of these samples led by Ph.D. student Damian Hernandez, we are using this robust dataset to answer several important ecological questions concerning habitat specificity of taxa, community similarity across spatial scales, and the extent to which habitat structure fungal co-occurrence patterns. Ultimately, we hope to gain a much-needed landscape-level understanding of fungal and bacterial communities.

Through this work, we are uncovering previously unknown roles of fungi and bacteria for plant population dynamics and are better mapping out fungal and bacterial distributions across the landscape.

President’s Corner From Inoculum, February 2020: Dear Mycologists, Greetings! I hope your New Year is off to a fabulous start. In Wisconsin the semester’s in full swing and I’m feeling by turns crushed and excited Read more…