Alexander Kovalenko (Sasha) was born on 13.09.1953 in Novocherkassk, Rostov Oblast, in 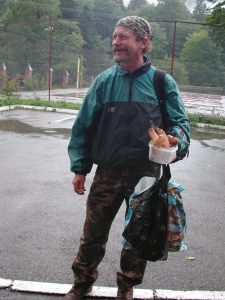 a family of biologists. In 1975 Sasha graduated with honors from the Faculty of Biology of Kuban State University. Then he continued his postgraduate studies at the Komarov Botanical Institute of the Russian Academy of Sciences in St. Petersburg. He successfully defended his Ph.D. thesis “Fungi of the order Agaricales s. l. in the mountain forests of the central part of the Northwest Caucasus” in 1981. Subsequently, all his scientific activity was connected with this institute. Alexander Kovalenko is an outstanding Russian mycologist known throughout the world. His research interests were different aspects of biology, ecology, and diversity of agaricoid fungi, including systematics of Hygrophoraceae and Boletaceae as well mycorrhizal symbiosis and

conservation of fungi. He has raised several generations of undergraduate and graduate students. For a long time, from 1986 to 2018, he headed the Laboratory of Systematics and Geography of Fungi. Thanks to his efforts, the laboratory systematics and geography of fungi became a leader of mycological studies in Russia. From 2002 to 2018 he became a deputy director for science of the Institute, also the first deputy and later Editor-in-Chief of the leading Russian mycological journal Mycology and Phytopathology, a member of the editorial boards of the international journals, Mycological Progress (Germany), Acta Mycologica (Poland), and Ukrainian Botanical Journal. He was the founder and head of the Commission for the Study of Macromycetes, the St. Petersburg Mycological Society, as well as the main editor of the popular scientific journal Planet of Fungi. Alexander Kovalenko was the initiator of a long-term project to study fungi and myxomycetes in Vietnam. He led fungal conservation activities in Russia and was a member of the Executive Council of the European Council for the Conservation of Fungi. He was involved in the work to protect fungi across the world.