An informal study of growing fruticose lichens in greenhouses

An informal study of growing fruticose lichens in greenhouses

ABSTRACT – Two species of wild-collected lichens, Usnea lapponica (from Colorado) and Ramalina menziesii (California) were placed into wet and dry greenhouses at the University of Colorado (Boulder). The purpose was to determine whether the lichens could survive within the confines of a greenhouse and assess whether wetness or dryness had any discernable effect on the survival of the lichens.

Although the greenhouses received the same amount of sunlight and their internal temperatures were the same, lichens in Greenhouse A were watered daily at regular time periods using Boulder County (Colorado) tap water while the lichens in Greenhouse B were not watered except by an occasional thorough misting with deionized water.

Likely due to a combination of factors regarding frequency of watering, content of water, and amount of water, the lichens did not survive long-term in the greenhouse. Lichens in Greenhouse A died very quickly (complete ‘bleaching’ or death of algal photobiont causing whitening of the lichen and subsequent presumed death of mycobiont), while the lichens in Greenhouse B survived over a year and a half from the time of translocation, albeit with some signs of distress (some bleaching). These results should be used as a very preliminary baseline for greenhouse-grown lichen transplants that could be used to alleviate conservation inadequacies in vulnerable lichen populations in the future.

INTRODUCTION – Lichens are complex symbiotic organisms made up of a fungal partner, a photobiont partner (algae, cyanobacteria, or both), bacteria, and occasionally endolichenic partners such as yeast (Spribille et al. 2016). Although nearly 20% of fungi are lichenized (Lutzoni 2001), lichens–and fungi in general–are vastly underrepresented in conservation policy. The USA only has one active federal law (The Endangered Species Act) that affects fungi, and only two species are listed under that law (Allen and Lendemer 2015).

To alleviate the pressure of biodiversity loss, researchers are exploring translocation or transplantation experiments that could reintroduce species that have disappeared from previous habitat. However, efforts to grow these fungi in their lichenized state (i.e. not as axenic fungal cultures) have been largely unsuccessful. However, the number of cultivation and/or transplant experiments is increasing (Allen 2017, Smith 2014, McCune et al. 1996, Denison 1988) and these studies show promise for successful growth and restoration of wild-collected lichens for conservation use in the future.

Successfully establishing methods for growing lichens in greenhouses has many potential conservation benefits. Outdoor experiments are also necessary, but can run the risk of complicated and time-consuming land-use permission processes, vandalism of transplants, wildlife damage, inclement weather destroying transplants, and in some cases time-consuming, expensive trips to transplant sites. Despite these difficulties, few studies have experimented with or even documented growing lichens inside greenhouses instead of outdoors (Culberson 1962). More than 50 years ago, Culberson noted in a short communication that a sterile, leprose lichen had been found flourishing in a Parisian greenhouse, despite the “extremely calcareous water of Paris as well as the badly contaminated atmosphere at the center of the city” (1962). However nearly all lichen cultivation research focuses on outdoor transplants and axenic culturing of mycobionts.

Towards the goal of greenhouse-grown lichens for conservation, this exploratory study was conducted to test some methods of indoor transplantation with wild-collected Usnea and Ramalina species to two greenhouse spaces at the University of Colorado at Boulder. 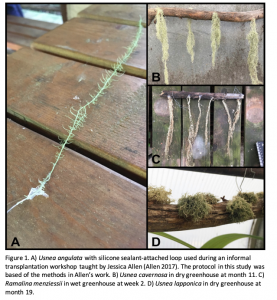 disease, and no evidence of infestation by insects. Branches of approximately 25–30 cm were also collected for reattachment substrate. The branches were baked in a conventional oven for 2 hours at 260 C in order to kill fungi, insects, or bacteria that may contaminate neighboring plants inside the greenhouses. The branches were allowed to cool completely before the next step.

The lichens were then attached with silicon sealant by making a 0.5 cm diameter drop of sealant at various points along the branch (approximately 5-15 cm apart, staggered) and holding the lichen in the sealant for 60 seconds. If an obvious end was apparent (e.g. a small piece of bark where the lichen had broken off the tree; this structure was frequent in Usnea species), this end was used as an attachment point. If there was no evidence of prior attachment point, the lichen was hung near the end of its length (Figure 1 A).

Greenhouse A is a humid greenhouse and is watered using a fine mist of Boulder County tap water. (see Table 1 for pH and dissolved mineral content.)

Because of the complications in obtaining accurate growth results by length and weight in constantly variable moisture conditions, the lichens were not measured for growth in this preliminary study, but simply monitored for survival.

Colorado Analytical Laboratories tested the greenhouse water for pH and various dissolved solids (Table 1). The deionized water used to mist Greenhouse B specimens was not tested.

The lichens were presumed dead when all color had disappeared from the thallus. This ‘bleaching’ appeared in patches and could happen very rapidly.

Because of the frequent watering schedule, Greenhouse A lichens were completely soaked within their first day in the greenhouse and subsequently never dried completely. These lichens lost all color within four weeks. Specifically, the Ramalina lichens were the first to lose color and showed complete bleaching within two weeks (Figure 1 C), while the two species of Usnea persisted approximately two weeks longer.

Greenhouse B lichens were allowed to dry completely between infrequent waterings with deionized water. These lichens showed signs of bleaching by October, but were not completely bleached until 19 months after translocation to the greenhouse. Again, Ramalina species were first to show complete bleaching (approximately 9 months after introduction into Greenhouse B) while the Usnea species persisted longer (Figure 1 B,D).

DISCUSSION – Due to the exploratory nature of this non-rigorous study, 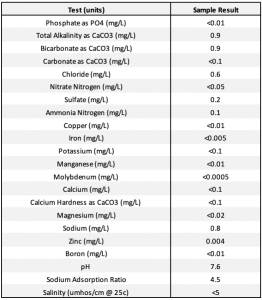 there are likely several factors at work affecting the survival of these lichens and a single cause cannot be discerned at this time. More exacting studies are needed to discern specific effects; however, some observations can be made.

Lichens in the wet greenhouse died significantly faster than the lichens in the dry greenhouse. This suggests that too much moisture, or perhaps the inability to dry out completely between moisture events, is fatal to these species of lichens.

Alternatively, something in the water supply, and not necessarily the amount of water itself, could have contributed to the rapid death of Greenhouse A lichens. Lichens are known to be sensitive to pollution and are used as biomonitors of air quality (cite cite). Some dissolved substance in the water may be acting as a pollutant, even at the levels indicated in Table 1 that appear to be safe for the surrounding greenhouse plants. It should be noted that the pH of the greenhouse water is slightly more basic than pure water at pH=7.6, while California and Colorado have pH in the 4.7-5.5 range (National Atmospheric Deposition Program/National Trends Network).

The distributions and climatic conditions experienced by test species in their native habitats vary. Usnea cavernosa and Usnea lapponica were both collected from approximately 3300 m (11000 feet) elevation above the high desert and below true alpine conditions, while Ramalina menziesii was collected at less than 600 m (2000 feet). All three species have a widespread distribution along western North America, but the Usnea species extend inland and face a greater degree of temperature and moisture fluctuation while Ramalina menziesii is restricted to generally temperate regions near the coast. These ecological constraints of the species’ natural habitats may have had an effect on their longevity in the greenhouses.

CONCLUSION ­– It appears that volume of water, water content, frequency of watering, an untested factor (access to free-flowing air, temperature inside the greenhouses, ambient fertilizer or pesticide reactions, etc.), or a combination of several factors have a strong effect on lichen survival in a greenhouse setting. In order to disentangle which processes have which effects on lichen survival, rigorous experiments must be undertaken in the future. Specifically, studies testing how only differing amounts of water, differing water elements (i.e., pH or chloride content), frequency of watering given stable water volume and content, and combinations of these affect lichen survival are good next steps. Additionally, a standardized method should be used, such as the dry weight method in McCune (1996), for accurately measuring lichen growth. Lastly, more studies are needed to assess what, specifically, about the greenhouse environment appears to be harmful to lichens (lack of air flow, sensitivity to pesticide application, etc.). Harnessing the power of greenhouses to grow endemic or rare lichens in order to transplant into favorable environments could be an effective way of conserving these distressingly under-protected fungal organisms.

ACKNOWLEDGEMENTS ­– I thank the CU Greenhouses staff, especially Tess Additon (CU Greenhouses, University of Colorado at Boulder), for their and her invaluable help in securing greenhouse space and for furnishing me with greenhouse water analysis data. I also thank Jessica Allen (Eastern Washington University) for her help in revising this article.

Featuring 12 speakers from around the globe, World Fungi Day symposium is now launched! Visit the booking link to join! Speaker and program information can be found here.