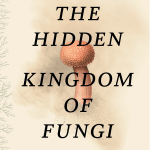 Our mantra as graduate students of mycology in the 1960s was “No Fungi, No Future!” We knew, as Rob Dunn says in his Foreword to this book, that fungi hold the world together. But until recently nobody seemed to care or want to hear how their very lives depend on the activities of largely invisible organisms. To the non-mycological world, fungi were either edible or nasty.

That’s changing. The approaching climate disaster has sharpened our appreciation for nature and our environment. Whether this new appreciation may be too late for what could be the coming “well run dry” is up in the air. I do sense a fresh breeze.

Paul Stamets has been preaching fungi for many years and Louie Schwartzberg’s movie, Fantastic Fungi, based in part on Stamets, is superb.

The description of the chatty exchanges among trees and other organisms in forests, described in Peter Wohlleben’s book The Hidden Life of Trees, has become outstandingly popular. Putting aside whether trees and other critters in the forest are sentient gossips, The Hidden Life of Trees and its sequels have compelled us to enter into the intimate relationships that are found in forests.

The message from all this is pretty obvious: No fungi? No forest! No future!

For whatever reason, mushrooms and fungi are now hot in popular culture (not Petri dish): fashion, wellness potions, design, hand sanitizers, meditation – the list goes on. There are now Murano glass mushroom lamps, and Gucci mushroom-themed luxury goods based on a Himalayan morel called – wait for it – guchchi.

So, with all this newly awakened awareness of fungi in culture, and what with fungal networks in the woods, it’s inevitable that somebody will want to know more about the molds. What’s more, fungi are, as the author, Keith Seifert says, among our closest relatives. We SHOULD know more about them.

Keith Seifert describes many of the ways that fungi are embedded in our lives and urges us to get to know them better. Humans certainly benefit by letting fungi train them to become even more deeply dependent on them than they are now.

This book, just shy of 300 pages, is divided into three parts. Part 1 introduces us to what fungi are, where they are found, and a general discussion of their nutritional modes. The five chapters of Part 2 examine fungi in forests, agriculture, fermentation, the built environment, and the animal body. Mycotechnology and a speculative chapter about sustainability that I think of as “what if fungi ruled the word (what a better place it would be)” comprise Part 3.  There’s biocontrol, plant disease, endophytes, mycorrhizae (endo- and ecto-), beer, koji, and brie cheese. Enzymes and building construction, zombie ants, allergies, and mycoses––and jock rot, AIDS, Candidiasis, and mycoremediation.

Keith Seifert is one of the preeminent mycologists of our time. It would be a toss-up to name his most famous work of fungal taxonomy: Valsonectria simpsonii, named for Homer Simpson, or the monumental Genera of Hyphomycetes (published with Gareth-Morgan Jones, Walter Gams and Bryce Kendrick). Working in Agriculture Canada, Keith collaborated in many projects that were not strictly taxonomic and many of these are summarized here.

Technical bits are clearly explained, and Keith does not obsess over Latin names (there is an appendix for that), and he explains how some latinized terms are derived. There is also a phylogenetic index that illustrates important morphological characters. Keith has a recognizable style.  It would be impossible – and very sad – to try to eliminate the founding editor and principal correspondent of Rot Nots, maybe the most outrageous mycological journal ever “published”, from his writing. The book is Keith’s very serious attempt to introduce you to his many fungal friends in a way that is always interesting and sometimes even fun. Some examples: What other mycology text would place Norman Borlaug’s Green Revolution in the context of the Watts Riots of 1965? Or, I would love to have attended the lecture where the lichenologist “prof muttered into his lichen-like beard” while talking about the slow growth of lichens. Ophiostoma ulmi, cause of Dutch Elm disease, was first isolated by Beatrice Schwartz – who was not recognized for 10 years; a footnote gives a reference to a publication that describes difficulties faced by women scientists working with this disease. Please allow me just one more …. Fusarium graminearum infected grain causes pigs to “barf”. “Vomit” would have been so much more proper – but a lot less fun (not for the pigs).

I could quibble over omissions. It’s too bad that white-nose syndrome of bats is not included, and fungus-dependent plants that have “dust” seeds are a particularly rich story of cooperation among some plants and a bunch of diverse fungi. I could have wished for a more complete coverage of endophytes, how one subset of species and genera seems to occur in the sapwood of trees and another in leaves, and how biocontrol using Trichoderma might be more the result of improved plant health than classic mycoparasitism or mycotoxin production. I suppose other specialists could find gaps, but the point is that there is there is so much here.

If I were teaching a mycology class, an environmental studies class, a forest ecology class, or even a general biology class, I would want my students to read this book. I could envision offering a continuing education class at a local college based on the book. There is so much summarized here!

I highly recommend The Hidden Kingdom of Fungi: Exploring the Microscopic World in Our Forests, Homes, and Bodies to all mycologists.