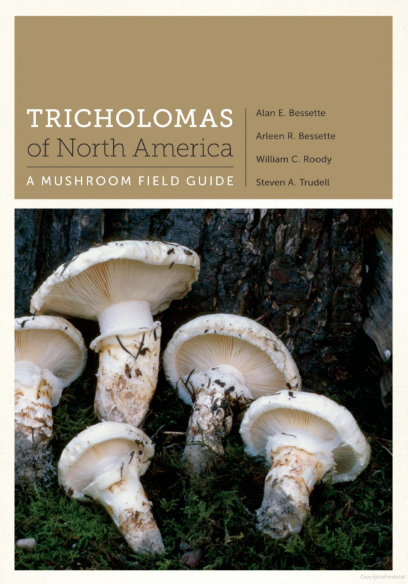 The name Tricholoma was proposed by Elias Fries, the Swedish mycologist known as the “Father of Mycology”, for a ”tribe” of mushrooms in 1821. That name was elevated to the rank of genus in 1857, as discussed by the authors of the book under review here.  Team Bessette, Alan and Arlene, plus co-authors Bill Roody and Steve Trudell, have courageously taken on the challenge of producing a field guide to the North American species of Tricholoma; no one else has done that, so far as I know.  I use the term “courageously” because the concept of Tricholoma, as a genus listed in index Fungorum (http://www.indexfungorum.org), includes nearly 1,300 names applied variously to species, subspecies, varieties, and forms of Tricholoma worldwide. Many are synonyms of species previously named or have been moved from Tricholoma. With the advent of light microscopes, scanning electron microscopes, and DNA analytical techniques, the initially heterogeneous genus has been split into about 33 genera. These subtractions reduce the total number of species remaining in Tricholoma to perhaps 500 or 600. (I have not counted them.)

But wait! No doubt more new species remain to be discovered and not only in areas not explored for them. For example, Tricholomas of North America contains 70 named species, nearly three times more than any other book on North American mushrooms, plus 14 too poorly known to permit naming until more data become available. Many species are look-alikes of species described originally from Europe and are included by their European names in the book. But as the beautiful color photos in the book reveal, color can often vary considerably between specimens or groups of a species of Tricholoma. DNA compared between North American and European specimens of look-alikes in many genera of mushrooms reveals that look-alikes can differ genetically enough to merit separate names. So far as I know, such DNA comparisons have yet to be systematically pursued for Tricholoma spp.

That said, the courageous authors devised keys to simplify identification of specimens in hand by separating keys by regions and cap colors first off. Species known from more than one region or vary by cap color within a species key out in both region and cap color separate keys. I advise careful study of an introduction to a key in any field guide you use for the first time: different books may differ in key format. The authors have devoted care to compose keys that are easy to use. Occasionally the keys don’t work perfectly when different individuals of a species have different colors. These instances are infrequent however, and are unlikely to cause problems except when a specimen is not behaving itself. The photos are a feast for the eyes and remind one that Tricholoma can be beautiful and even stately. Along with the photos, the lucid descriptions of each species can resolve most identification problems when a species is not conforming completely to the key.

My first encounter with “Tricholomas of North America” came in North Cascades National Park in northern Washington, when I collected one that keyed out in about two minutes to T. moseri. Until that exciting moment, I had no idea that such a species existed; this book is the only North American one where T. moseri has appeared. I reckon the same can be said for some other of the book’s species as well. What made it especially memorable happened some years earlier; I had been collecting in the North Cascades with Prof. Meinhard Moser, the namesake of the species! I love this book!

Postdoctoral Researcher: Duke University The Vilgalys Mycology Lab at Duke University seeks a postdoctoral researcher in the area of plant-fungal symbiosis and evolution.  The selected candidate will contribute to ongoing studies on evolution of forest Read more…