While it’s not unusual to find me just outside of my house picking through piles of mulch or rolling over a fallen branch, the number of afternoons spent scouring my backyard for fungi over recent weekends is unmatched by any time in memory. No blade of grass within the fence line, no potted plant in sight has gone uninvestigated. Like so many of us under stay-at-home orders, quarantines, or self-isolation, I find myself revisiting overly familiar spaces, yearning to see something new. Fortunately, mycologists are of the observant persuasion and predisposed to spot interesting things in mundane places. For my part, a few unexpected finds this spring remind me that a thoroughly close observation will always reveal some novelty, even in well-trodden territory. 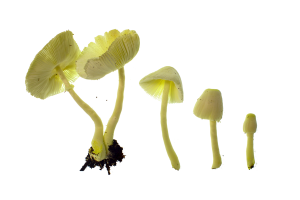 Image left: Flowerpot parasols (Leucocoprinus birnbaumii), pictured here during different stages of fruiting, are common in greenhouses and potting soil but can go undetected for long stretches of time when conditions are not favorable for sporulation.

A fiddle leaf fig, having languished in a dimly lit window all winter, is finally showing fresh growth after being moved outside. As I regarded this plant skeptically over my morning coffee for months, I’m pleased to see that it is, in fact, still alive. But more impressive than the slight green shoots were the masses of flowerpot parasols (Leucocoprinus birnbaumii), hidden from sight for the better part of a year but now making themselves known as they expand in the May sun. Just around the corner by the garage wall, an elm sapling, whose leaves opened unceremoniously, is now called home by ants, aphids, and anthracnose – a foliar disease caused by Stegophora ulmea. Looking out on this scene from a windowsill is a piece of ground ivy brought inside in April that grew a wooly coat of powdery mildew (Neoerysiphe galeopsidis), to keep itself warm, I assume, during a late cold snap here in Minnesota. 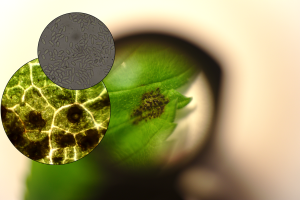 Image right: The first signs of elm anthracnose, or black spot, caused by Stegophora ulmea are shown through a 10x hand lens, with higher magnification insets of pycnidia and conidia.

It would be tempting to trade these small finds for a list of more exotic fungi found a greater distance from home, but there is something comforting in being able to uncover new things so near at hand. No doubt most mycologists inclined to hunt for mushrooms will make their summer and fall forays closer to home this year, and I know I plan to return many times over to my own backyard. As focused observation of the places closest to me continues revealing new fungi, I wonder what curious discoveries might be made by other mycologists seeking novelty in the familiar.