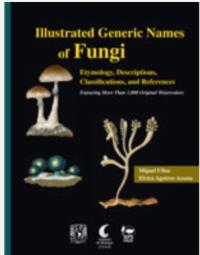 Miguel Ulloa and co-author Elvira Aguirre-Acosta have produced a tome that helps readers obtain biological information for 1,592 genera as well as the current classification, etymology of the generic name, authority names and citations, and illustrations. In addition to genera from the Kingdom Fungi, the authors include a number of genera from the Chromista and Protozoa because these have historically been studied by mycologists.

This book is a greatly expanded version of “Etimologia e Iconografia de Géneros de Hongos”, by Ulloa and Herrera (1994) which treated 807 generic names. Ulloa and Aguirre-Acosta added 784 generic names to this publication. In addition to treating the larger number of taxa, this publication lists generic names alphabetically instead of taxonomically, making it easy for readers to find the generic entry. Ulloa created beautiful watercolor illustrations of species in 1,052 of the genera, whereas the previous publication included 795 black and white images. Especially notable is the fact that the most up-to-date taxonomic classifications have been added, which is especially important following One Name=One Fungus, such that synonyms are cross-referenced to the correct generic name.

For each genus the authority(s) is included, followed by the current classification from family to Kingdom. Next provided is the full citation of the publication in which the genus was first described. This is followed by the etymology of each of the generic names. As pointed out in the Introduction, etymology is an important aspect of this book and, as such, the authors have made an important contribution by including the etymology of each name. Etymology is a linguistic discipline that studies the origin of words and the way in which their meanings have changed throughout history. Knowing the etymology of the name can help in remembering characteristics of the genus. Finally, the authors provide a description of key morphological, biological, and ecological characteristics of the genus.

It is clear that this book is a labor of love by Miguel Ulloa; love of fungi, etymology, and art. This book is a significant contribution to mycology. Although treating a little less than 20% of the genera included in Kirk’s Dictionary of Fungi, Tenth Edition (2008), this book covers a wide range of genera described and collected worldwide. The authors state that they hope that, “… students of mycology and related fields will find this volume a useful supplement to the usual mycology texts.” I suggest that the authors have succeeded in their goal and recommend that this book be part of a mycologist’s basic library.