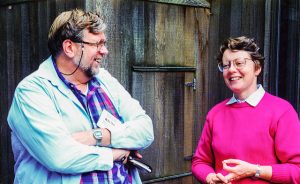 Walt Sundberg and Nancy reminisce about mushrooms they have known at a 1992 barbecue during the MSA annual meeting in Portland, Oregon. (photo by Scott Redhead)

As the only child of two biological scholars and field researchers, Nancy early developed a passion for the natural world, especially fungi. She grew up travelling and working in both field tents and lab with her parents, the eminent 20th century North American mycologist Dr. Alexander Hanchett Smith and paleobotanist, fellow agaricologist, and co-author Dr. Helen Vandervort Smith. Given that she went on her first morel hunt at six weeks of age, it is not surprising that Nancy was not above deflating the egos of mycologists visiting Dr. Alex by correctly identifying mushrooms to species using the proper Latin. (Harry Thiers, for one, found her precocity at age six a bit difficult to take, noting to Nancy’s amusement in 1995, “I could have strangled her on the spot.”)

Not surprisingly, her early dedication to fungi blossomed into a lifetime of service to North American mycology. Nancy was a careful and excellent scientist, with a lifelong interest in cup fungi and their relatives. She published primarily on members of the Pezizales, particularly the genera Helvella and Morchella. Nancy co-authored several field guides with Alex and Helen and was a major force in the successful publication of The North American Species of Lactarius by Hesler & Smith. Perhaps most importantly, Nancy was instilled with a love for fungi and mycology that she maintained throughout her life and shared with everyone, no matter their calling, through publications, forays, lectures, and conversation. She was also a skilled science writer and editor and her dry, occasionally self-deprecating wit and wry humor made both lectures and her more casual literature highly entertaining.

Nancy met her husband, James A. Weber, when they were students at the University of Michigan. Jim and Nancy married in 1970 and lived in Ann Arbor until 1988. During that time Nancy conducted research at the University of Michigan Fungus Herbarium and was actively involved with the Matthaei Botanical Gardens, which today includes the Helen V. Smith Woodland Wildflower Garden, named in honor of Nancy’s mother. Nancy and Jim also served as co-editors of The Michigan Botanist during 1985–1988.

Following the death of Alex in 1986, Nancy, Jim, and Helen moved to Corvallis, Oregon, in 1989 where Jim had accepted a position with the US Environmental Protection Agency laboratory; Nancy’s mother lived nearby, providing encouragement until her death in 1995. In 1990 Nancy was appointed Assistant Professor/Researcher at the Oregon State University Department of Forest Science, a position she held until 2004, after which she served as an affiliate faculty member. During 1995–2004 the Forest Service contracted her as ascomycete identifier for the Northwest Forest Plan, and during 2002–2003 she ranked rare and unusual fungi for the Oregon Natural Heritage Information Center—discovering in the process the frustrating imprecision inherent in ‘government work.’ Husband Jim, who fully supported Nancy’s research and served as willing photographer and field companion, suffered a fatal heart attack in 1998 while riding his bicycle home from work. Nancy soldiered on alone and continued the fungal survey of her now-famous backyard, expanding her knowledge of kingdom Fungi and reaffirming her belief that fungal rarity may be due more to the scarcity of mycologists than to actual occurrence of the species themselves. Nancy, affectionately known as “the Mushroom Lady” in Corvallis, died of complications from Parkinson’s disease on December 19, 2020.

Nancy left behind a substantial written legacy, contributing to over 40 scientific papers and reports, and delivering well over 95 scientific and general lectures on fungi. She coauthored four books with one or both parents—How to Know the Gilled Mushrooms (Smith, Smith & Weber 1979), the revised The Mushroom Hunter’s Field Guide (Smith & Weber 1980), How to Know the Non-Gilled Mushrooms (Smith, Smith & Weber 1981), and A Field Guide to Southern Mushrooms (Weber & A.H. Smith 1985)—but perhaps her most popular and enjoyable mycological contribution was A Morel Hunter’s Companion (Weber 1988), the comprehensive labor of love she shared with Jim as photographer. Among her more entertaining papers is “Musings on ‘Mushrooming’” (McIlvainea 2001) revealing how much information can be gained by monitoring the day-to-day development of fruiting bodies in one’s own backyard. Greatly disappointed by the disappearance of “Pezweb,” her website dedicated to the study of the Pezizales that lost its government platform sometime after 1998, Nancy devoted her last years to a loving (unfortunately never completed) biography of her parents.

Alexander Smith’s papers have been returned to “MICH,” while most of Nancy’s library was donated to the Orma J Smith Museum of Natural History (College of Idaho), founded by (and named for) Nancy’s grandfather and Helen’s father. Nancy’s fungal collections are now housed in “OSC” and her own work, presentations, and backyard journals will be donated to the Special Collections and Archives of the Oregon State University library system. Perhaps someday another mycologist will complete her Smith family biography.