Mycology During the Quarantine: News from Bogota, Colombia

Mycology During the Quarantine: News from Bogota, Colombia

In 2018, I moved to Bogota, Colombia, to start my own lab at Universidad del Rosario. In 2019, I started an undergraduate research group focusing on studying the ecology, function, and interactions of tropical fungi. We named our group FUNGI-UR. I never thought this was going to be such a fun and rewarding experience. The group gained recognition very quickly. I started with three students last year and now we have about 12 members! During the quarantine we have continued to have Zoom meetings once a week to listen to student presentations and discuss topics about mycology. We have talked about phytopathogenic fungi, mycoheterotrophic plants, fungal allelochemicals, and entomopathogenic fungi.

We live in a big city so it’s difficult to find mushrooms nearby, but I asked my students to tell me if they had found mushrooms during the quarantine and actually two of them had found some mushrooms in their backyard. These are their stories:

“I was accompanying my father to the door through our garden, when I notice something coming out from the grass. I realized it was a little fungus that I have not seen before. My dad ignored it, but I saw it. I ran into the 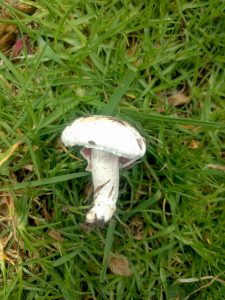 house to look for my cellphone to take a picture. It was April 11, 2020. Two days later, I walked out into the backyard to sunbathe and rest when I saw a few little white fungi. I was excited because they looked like edible mushrooms and I took some pictures. The next week, I saw more of these white fungi in other places around the yard. I decided to collect one of them to take photos and look at the lamellae carefully. Their color was pink and later I figured out it was an Agaricus sp (left).”

“Basically, it was a normal day in quarantine­–April 12th to be more precise­–when I noticed a foul odor like rotten meat coming from the yard. Maybe, another dead mouse, my cat’s gift, I thought. At the same moment, my grandmother asked me; Did you see the fungi? Immediately I understood it all. 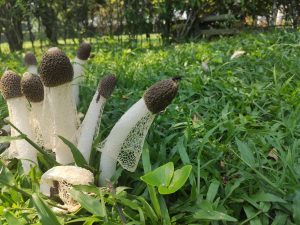 Not only was I able to identify the source of the odor, I was also able to identify the fungi because of its veil, Phallus indusiatus (right). I was fascinated. During the next days, about 10 fruiting bodies appeared every day. And they weren’t alone, a colony of Coprinus sp. (below) appeared too!”