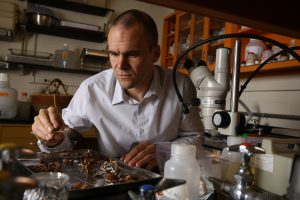 Peter Kennedy received his bachelor’s degree from The Evergreen State College and his doctorate from the University of California, Berkeley.  He was a post-doctoral research fellow at Point Reyes National Seashore before joining Lewis and Clark College as an assistant professor in the Department of Biology. In 2013, Peter moved to the University of Minnesota to join the Department of Plant and Microbial Biology, where he became a full professor in 2020. Peter is an ecologically-focused mycologist who is broadly interested in plant-microbe interactions. He has worked most extensively on the ectomycorrhizal fungal symbiosis, focusing on how the structure of ectomycorrhizal fungal communities is influenced by factors such as interspecific competition, host specificity, and biogeography.