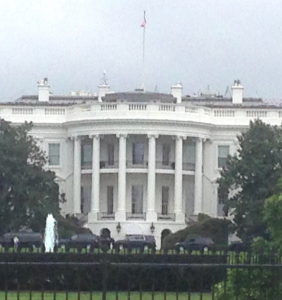 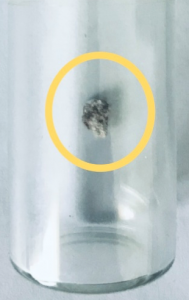 of Phoma violacea on the painted surface. In the autumn of 2000, preparing for the new administration (President George W. Bush), the 16-year-old white paint on the sandstone columns was removed by sandblasting. This was followed by priming and top-coating, but this painting process was suspended for the winter months, resumed in the spring of 2001, without incident until purple spots were noticed. Attempts were made to remove the discoloration by scrubbing with an alkaline (pH 11.5) detergent (KOH-sodium metasilicate pentahydrate) solution, but this only resulted

in an intensification of the purple hue; addition of acid changed the color to pink which was still unacceptable. The affected area comprised only 5% of the total painted surface, mostly dime-size but was clearly noticeable. The paint was an alkyd, oil-based formulation (modified linseed oil); the primer (undercoat) and topcoat were comprised of various pigments and colorants (zinc, cobalt, and manganese), resins, mineral spirits, and a mildew-/fungicide (2-n-octyl-4-isothiazolin-3-one). The presence of metals in the formulation suggested a possible cause for the discoloration, but purple spots were not present on the 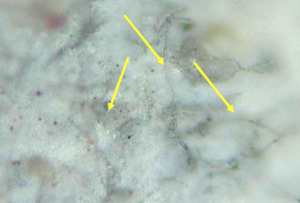 South columns and only certain areas of the North columns had the defect. Upon examination of the purple spots under both optical (reflected) and electron microscopy (SEM), it became obvious that fungal growth was the culprit behind the defacement; this was confirmed by culture techniques and literature consultation. The fungus was identified as Phoma violacea (which translates as violet wart or pustule). It is one of the few molds known to colonize sandstone, specifically paint films, along with Penicillium frequentens (green-brown color), Cladosporium cladosporiodes (green-dark green color), Alternaria alternata (brown-dark brown color), and Trichoderma viride/pseudokoningii (green color), but only P. violacea has the purple color. (There are other purple-pigmented molds such as Paecilomyces lilacinus, but it grows on plastic surfaces rather than paint films.) P. violacea forms a vegetative mycelium with specialized fruiting bodies (pycnidia) containing conidia (spores). The purple insoluble pigment is synthesized in response to sunlight and is intensified by alkaline conditions. It can grow under anaerobic conditions; therefore, capable of subsisting below paint films (subsurface). P. violacea derives inorganic nutrients from sandstone by its metabolic organic acid formation. Optimal

growth temperature range is 68-77°F (20-25°C), which corresponds to late springtime temperatures in the Washington, DC, area, and it prefers moist areas (like the north side of structures). P. violacea is non-pathogenic (saprophytic) and is found naturally within soil and water environments. It is considered to be an industrial spoilage organism in linseed oil-based paints and has been found growing on museum oil paintings under high humidity conditions (>80% RH). The mold is resistant to both formaldehyde disinfection and heavy metals (including lead) but readily killed by application of calcium hypochlorite. In the case of the White House

North columns, the purple-discolored paint was physically removed, the sandstone sprayed with a 1% (w/v) sodium of hypochlorite solution, allowed to thoroughly dry, then repainted with a fresh coat of fungicide-fortified primer and topcoat. No recurrence of this defacement problem has been reported since this incident on its 20-year anniversary.