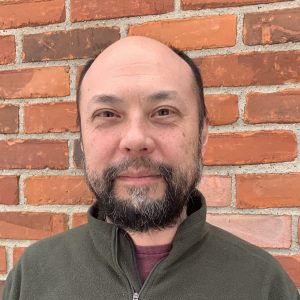 Timothy Y. James is a Professor of Ecology and Evolutionary Biology at the University of Michigan, the Curator of Fungi at the University Herbarium, and the Lewis E. Wehmeyer and Elaine Prince Wehmeyer Chair in Fungal Taxonomy. He received his BSc in Botany from the University of Georgia and his PhD from Duke University with Dr. Rytas Vilgalys. His scholarship focuses on reconstructing the Fungal Tree of Life and using genomics to determine fungal mating systems, ecology, and life histories. Taxonomic foci include the zoosporic true fungi and other early diverging lineages of fungi, particularly those that are unculturable. Current efforts focus on developing methods for single cell genomics of fungi for the exploration of fungal diversity and the relationship of genotype to phenotype, mycoviruses, and the role of mitotic recombination during clonal cycles. He has served as MSA Councilor, and on several MSA committees: Research Awards, Student Awards, Distinctions, and Karling Lecture. Editorial contributions include co-editing The Kingdom Fungi (ASM Press) and serving as Associate Editor for Mycologia. Additional roles include Director of the department’s Frontiers Master’s Bridging Program, Co-Founder and Director of the Midwest American Mycological Information educational non-profit, and member of the DOE Joint Genome Institute’s Users Executive Committee. Tim is a fellow of the American Society of Microbiology and the Canadian Institute for Advanced Research, Fungal Kingdom: Threats and Opportunities.