Submitted by Huzefa A. Raja, Department of Chemistry and Biochemistry, University of North Carolina at Greensboro, Greensboro, NC 27402, United States 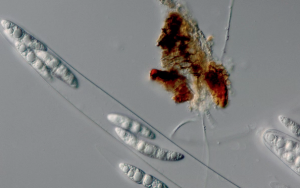 The Dothideomycetes are distinguished from the other Ascomycota (ascus bearing fungi), mainly based on morphological characters, such as ascostomatic (peudothecium) fruitbody and fissitunicate (bitunicate; functionally two layered) asci [1]. The freshwater Dothideomycetes (meiosporic, i.e. sexual state) are microscopic saprobic fungi that colonize and decompose submerged substrates, such as woody and herbaceous materials, in lotic (i.e. running water, such as streams and rivers) and lentic habitats (i.e. standing water, such as lakes, bogs, ponds, and swamps) [2-5]. They are primarily an ecologically group of fungi and play an important role in the breaking down of complex organic matter in aquatic habitats [6-8].

“The double layered, or bitunicate ascus remains an important morphological character in dothideomycete taxonomy. Bitunicate ascus consists of a thick extensible inner layer (endotunica) and a thin inextensible outer layer (ectotunica).  Most bitunicate fungi release their ascospores by the extension of the inner ascus wall and the rupture of the outer wall, similar to a “jack-in-the-box” (fissitunicate), but variations are numerous”. – Conrad Schoch, Tree of Life Project

One afternoon, while working on writing up the taxonomic description of an undescribed freshwater ascomycete fungus belonging to the genus Lindgomyces, I observed an ascus emerging out of the gelatinous psuedoparaphyses (sterile material) ready to undergo the jack-in-the-box dehiscence. In an effort to capture a video, I immediately pushed the record button on the camera, which was mounted on my compound microscope. Fortuitously, I was able to record the jack-in-the-box dehiscence of the freshwater fungus in real time.

The species you see in the video is Lindgomyces carolinensis, which was described and reported from submerged wood collected from a lake in North Carolina [9]. This genus belongs to a recently established family Lindgomycetaceae, Pleosporales Dothideomycetes, Ascomycota [9,10].

What is happening in the video?

In the video you see the endotunica emerging out as a long tube-like projection from the ectoascus (bottom right of the screen). The ascospores then move up in the ascus wall due to a vacuole that regulates inner pressure [1], and these are shot off forcibly through the apex of the ascus. Once the ascospores are shot out, you see how the gelatinous sheath unravels, thereby surrounding the entire ascospore, as soon as the spores touch water. After the sheath has unraveled in water, it shows the presence of gelatinous cap-like structures on the apical apices of the sheath [9]. The gelatinous sheath is hypothesized as an evolutionary adaptation for an aquatic existence [3]. In L. carolinensis, the sheath quickly disintegrates and, within a few minutes, it completely disappears and becomes invisible when the material is mounted in glycerin and/or lactic acid [9].

I hope this video is useful to students of mycology. While many may have seen pictures of this in books and journal articles, it is rare to capture on video.  It is fascinating to see how swiftly, and elegantly, the ascospores are ejected and released outside the ascus by the rupturing of the ectoascus and extending of the endoascus in a manner similar to that of a jack-in-the-box. In addition to social media platforms such as Facebook and Twitter, you can find this video on the website below:

President’s Corner From Inoculum, February 2020: Dear Mycologists, Greetings! I hope your New Year is off to a fabulous start. In Wisconsin the semester’s in full swing and I’m feeling by turns crushed and excited Read more…