Austen Apigo
Austen Apigo is a PhD candidate in Dr. Ryoko Oono’s lab at the University of California, Santa 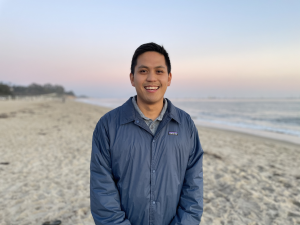 Barbara. Austen’s current research is focused on understanding how geography, climate and plant communities shape foliar fungal endophyte community structure and composition in the context of a continental-wide survey. He is also interested in how endophyte communities function as saprotrophs during leaf litter decomposition and their capacity to change the availability of leaf nutrients to soil decomposer communities. Outside of research, Austen enjoys spending time with his dog, Gwen, and building his skills as a birder.

Paris Hamm
Paris started in mycology under Dr. Andrea Porras-Alfaro at Western Illinois University where she received both her BS and MS degrees. Now, she is a PhD 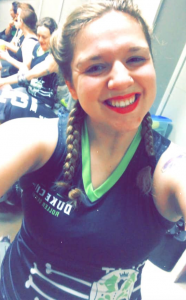 Candidate at the University of New Mexico supervised by Dr. Don Natvig. Her dissertation work is focused the small mammalian lung mycobiome and the disease ecology of the human and animal pathogen Coccidioides causing Valley Fever. Her first chapter published a new molecular detection tool as well as documented the first Coccidioides sequences from clinical cases in New Mexico and discusses the possibility of the Native community as a disease risk group. Her second and third chapters use next-generation sequencing, culturing, and qPCR to describe the lung mycobiome and presence of Coccidioides in the southwestern U.S. During her PhD, she has had the opportunity to collaborate with Dr. Bridget Barker at Northern Arizona University and work in a Biosafety Level 3 (BSL-3) laboratory on Coccidioides species phenotypic variation. She is also proud of the recent acceptance of an all-female collaboration reviewing Coccidioides research and women’s contributions to the field. She hopes in the future she will continue researching human and animal fungal diseases. She also enjoys playing women’s roller derby and women’s rugby. 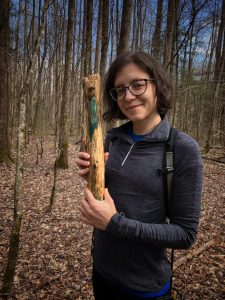 University of Tennessee, Knoxville. Her dissertation research focuses on systematics and drivers of diversification in the order Cantharellales. Rachel is a National Science Foundation Graduate Research Fellow and a passionate field mycologist who has worked extensively in the southern Appalachian mountains and in Patagonia. She also enjoys interfacing with citizen science mushroom clubs and giving presentations and workshops about fungi to a variety of audiences.

Taryn Mueller
Taryn Mueller is a currently a PhD candidate with Dr. David Moeller in the University of Minnesota’s 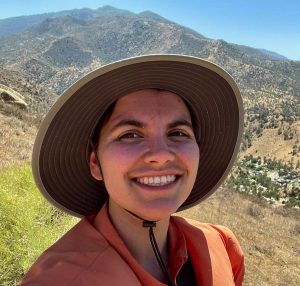 Ecology, Evolution, and Behavior program. They became interested in plant-fungal ecology as an undergraduate at Smith College, and worked with Dr. Jesse Bellemare to study how interactions with novel soil fungal communities might impact the survival of an endemic rhododendron as its range shifts. Taryn’s primary research interests are now centered around the ecological genetics of plant host-associated fungal microbial communities, primarily leaf endophytes. Their dissertation uses a series of intensive field surveys, transplants, and common garden experiments to untangle the relative influence of spatial distance, environmental variation, host genotype, and host phenotype on the assembly of fungal endophyte communities. Taryn is studying this in Clarkia xantiana, a winter annual flower, which is endemic to the southern foothills of the Sierra Nevadas. 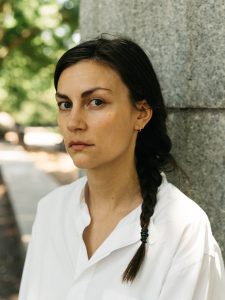 at Columbia University studying environmental biology. She is particularly interested in forest ecology, and the role that mycorrhizal networks play in forest dynamics. This summer she will complete her thesis research about the mycorrhizal networks formed between American hazel and canopy trees with her mentor at the University of Minnesota. In addition to her studies she is also a science writer, and believes passionately in the necessity of effective science communication. She completes her undergraduate degree in December 2021.

Nicole Colon-Carrion
Nicole Colon-Carrion was born in Puerto Rico, where she obtained her bachelor’s degree in Natural Science at the University of Puerto Rico-Cayey. After obtaining her bachelor’s degree, she joined the Post-baccalaureate Research Experience Program at Michigan State University where she worked in the area of Neurotoxicology. Nicole is currently a Ph.D. 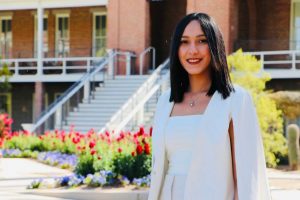 candidate at the College of Agriculture and Life Sciences at the University of Arizona working in Dr. Arnold’s lab. As a graduate student, she investigates how climate change impacts plant-fungal associations, with a focus on two main environments: tropical forests and agroecosystems. Particularly, her work focuses on understanding (1) how hurricane disturbances affect the diversity and composition of fungal symbionts associated with roots and leaves of tropical forest trees, and (2) how fungal symbionts can protect cultivated plants against disease under a rapidly warming climate. Nicole’s career goal is to return as an active scientist to Puerto Rico and become a specialist focused on the use of symbioses to develop microbe-microbe interactomes into biocontrol strategies to reduce pathogenicity and the use of chemical agents in the landscape. Specifically, she hopes to develop and communicate innovative strategies to local farmers to improve Puerto Rico’s declining agricultural practices and natural resource conservation, while training the next generation of Latinx STEM leaders and increasing minority representation and advocating for equality and diversity in science.

Adriana Romero Olivares
Adriana is a soil microbiologist who works at the intersection of ecosystem ecology and evolution with an emphasis on fungi. She is interested in understanding how fungi respond and adapt to 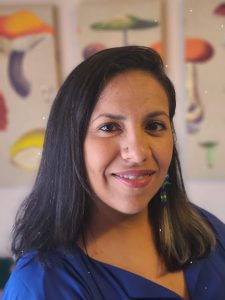 environmental stress. Her overall research goal is to better understand and plan for ecosystem-scale effects of global climate change. Adriana is originally from Mexico and received her PhD from the University of California Irvine where she investigated the effects of global warming on the soil fungal communities of boreal forests in Alaska. She did a postdoc at the University of New Hampshire where she was a Diversity & Innovation Scholar studying fungal traits and emission of volatile organic compounds in soils experiencing long-term simulated warming and nitrogen pollution at Harvard Forest. Adriana is now an assistant professor at New Mexico State University in the Department of Biology where they are exploring fungi in dryland ecosystems, their traits, and how they respond and adapt to global climate change. She is passionate about feminism, intersectionality, social justice, and equity in general, and more specifically in STEM. She loves knitting and mushrooms and has two guinea pigs!