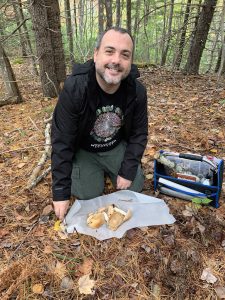 Alfredo Justo is the Curator of Botany and Mycology at the New Brunswick Museum (Saint John, Canada). He received his PhD from the University of Vigo (Spain) in 2006, under the direction of Dr. Marisa Castro. His doctoral research focused on the systematics of Amanitaceae and Pluteaceae in the Iberian Peninsula. Following several years of projects in Spain related to mycological conservation and diversity, he spent six years (2009-2014) as a postdoctoral researcher with Dr. David Hibbett at Clark University (MA, USA). Research and teaching positions followed (2015-2019), in Mexico, Spain, and eventually back to the USA, where Dr. Justo was a Visiting Assistant Professor at Worcester State University and a Visiting Scholar at Clark University. His general research interest is in molecular systematics of mushroom-forming fungi, especially those in the orders Agaricales and Polyporales, with related interests in fungal biogeography and conservation. His current projects focus on the mycological diversity of Atlantic Canada and adjacent regions, global systematics of the genus Pluteus, and taxonomy of lepiotoid fungi in the Neotropics and Eastern North America. A member of MSA since 2009, he is a frequent reviewer for papers submitted to Mycologia, where he has authored or co-authored 9 articles. Since 2020 he has served on the editorial board of Mycologia as an Associate Editor.