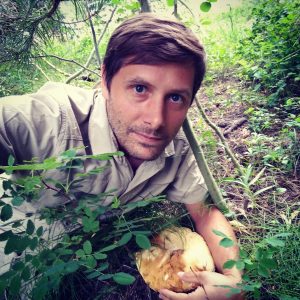 His research combines fieldwork and genomic tools to understand the global diversity, distribution, and evolutionary history of fungi, particularly the diverse and species-rich mushrooms and allies. He is particularly interested in understanding the evolutionary radiation of the family Boletaceae, with a special interest in porcini diversity and evolution, and the co-evolutionary symbiosis between fungus-growing ants and their crop fungi.

His outreach activities have included media appearances on television and film, and he served on MSA’s Biodiversity Committee from 2013-2017.