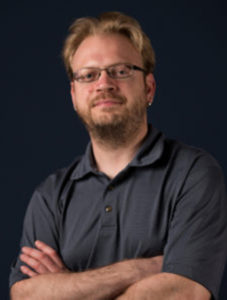 Chris Todd Hittinger is an Associate Professor of Genetics and the Primary Fuel Synthesis Team Lead for the DOE Great Lakes Bioenergy Research Center. His lab at the University of Wisconsin-Madison researches the genomic basis of yeast metabolic diversity, its evolution, and its applications in brewing and bioenergy. He is a Pew Scholar in the Biomedical Sciences, H. I. Romnes Faculty Fellow, and a National Science Foundation Early CAREER Development Awardee. In addition to membership in MSA, he is a member of the Genetics Society of America, Society for Molecular Biology and Evolution, Society for the Study of Evolution, American Association for the Advancement of Science, and represents the USA on the International Commission on Yeasts. His current tenure as Director of the J. F. Crow Institute for the Study of Evolution at UW-Madison has emphasized diversity, equity, and inclusion by founding the first standing committee to address issues and by expanding and promoting diversity among invited speakers for its Early Career Scientist Symposium. He has co-authored more than 80 publications on topics ranging from evolutionary genomics to molecular evolution to brewing to bioenergy. With co-PIs Antonis Rokas and the late Clete Kurtzman, he is the lead PI of the Y1000+ Project, which is sequencing and analyzing the genomes of all known budding yeast species to build a comprehensive genotype-phenotype map and to understand how yeasts have evolved their metabolic diversity. His lab has prioritized undergraduate research experiences through the Wild YEAST Program, training approximately 3 dozen students, one-third of whom have been admitted to PhD programs, including many from backgrounds underrepresented in science. As part of this discovery-driven pedagogical project and other research, he has formally described more than a dozen yeast species and is pursuing taxogenomic approaches to formally describe dozens of more species isolated by Wild YEAST Program trainees.