Christian Lechat, Founder of AscoFrance and Expert in Hypocrealean Fungi

It is with great sadness that we 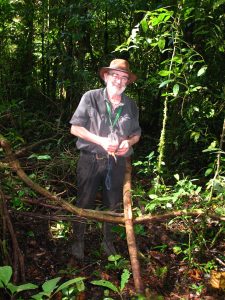 announce the death of Christian Lechat on 7 January 2022 at the age of 69. Christian was an amateur mycologist from France who developed expertise in the hypocrealean fungi, finding many new species, but who also moved forward the field of mycology by fostering interest and interactions especially in microascomycetes.

Despite a lack of academic background, and perhaps because of it, Christian developed many varied skills throughout his life, before becoming the mycologist we came to know and admire. Thanks to his considerable manual skills and artistic sense, he first made and marketed strikingly realistic scale models of mushrooms for use in pharmacies* and the Museum of Natural History in Paris. Later he made glass eyes for taxidermists from the smallest mammal to dinosaurs, which requires a lot of imagination! His technical and artistic qualities quickly made him a leader in this highly specialized market. In his youth, Christian was also a professional musician (bass guitar) and a talented cook. A turning point in his life came during his military service during which he was a male nurse, which revealed his interest, then his passion for the scientific approach to studying the natural environment. A decisive event was the invitation made by Régis Courtecuisse in 2002 to join a team of mycologists to undertake a long-term inventory of the fungi of the French West Indies. This mission allowed him to broaden his knowledge in the field of Hypocreales and microfungi, which he undertook to isolate in vitro in his personal laboratory.

Collecting in the French West Indies and Europe, Christian developed considerable expertise in knowledge of the hypocrealean fungi as well as other pyrenomycetes thus contributing greatly to knowledge of these often-overlooked but beautiful fungi. He had a keen eye for finding microfungi and collected throughout the world discovering many new species as well as clarifying knowledge of the ones already known. He acquired expertise in molecular sequencing including molecular results in his publications. His over 70 published papers often included a key to all the species of that genus thus ensuring their usefulness.

Christian started and maintained the internet site known as AscoFrance. On this site any registered member can upload a description and photographs of an unknown specimen, usually ascomycetes, and most likely someone would provide assistance in identification. Everyone is always helpful, instructive to others, and willing to share knowledge and expertise. Many of the photographs are amazingly good, especially the micrographs. In addition, obscure literature is made available on the website. Although initially used only by the active amateur ascomycetologists in France, it has now spread to users worldwide.

Christian fostered interest in microfungi in Europe by regularly holding workshops on ascomycetes. Participants at these workshops are serious about collecting, identifying, and learning about ascomycetes. Everyone collects nearby in the morning, has a hearty lunch with wine in the French manner, and then breaks into groups of operculate discomycetes, inoperculate discomycetes, bitunicate pyrenomycetes, and unitunicate pyrenomycetes to study their collections for the afternoon. After another tasty meal with appropriate libations, they listen to one or two invited speakers each evening. This goes on for a week with many inspired amateurs and new reports at the end. Amy has never known such a dedicated group of mycologists as the attendees at the AscoFrance workshop in which she had the privilege to participate.

Christian collaborated widely with mycologists throughout the world and contributed to their research by using his network of amateur mycologists whom he inspired to collect and identify microfungi. Considering that many type specimens of older described species, especially the types of genera that were collected in Europe, this was an extremely valuable contribution. For example, when Lisa Castlebury and Amy were working on the Diaporthales, we determined that Mazzantia napelii was the best outgroup for the genus Diaporthe. However, M. napelii is not the type of the genus. Rather it is M. galii, a species known from Europe on Galium aparine. Amy mentioned to Christian that we needed a fresh specimen of this species. He communicated with his friends interested in microfungi and soon a fresh air-dried specimen correctly identified as M. galii arrived in the mail. Thanks to this specimen, M. napelii and M. galii are now known to be congeneric. In addition, the type species of Mazzantia, M. galii was cultured and epitypified based on this excellent specimen on the original host from the original locality.

Christian Lechat contributed greatly to the knowledge of fungi, especially hypocrealean and other pyrenomycetes, but perhaps even more by fostering interest in ascomycetes and his establishment and development of the website AscoFrance in which anyone can query their latest exciting find. In 2020, he received the Gordon and Tina Wasson Award  from the Mycological Society of America. This is awarded to people with non-traditional academic backgrounds who have made outstanding contributions to the field of mycology. He had a remarkable impact on mycology especially in motivating amateur mycologists and professionals. On top of all his skills, Christian was a charming, modest, humorous man, and a tireless worker, qualities without which he would not have been able to establish the contacts that allowed him to progress and earn the esteem of his peers.

We will miss him greatly. Long live AscoFrance!

*In France pharmacists are charged with the identification of mushrooms.