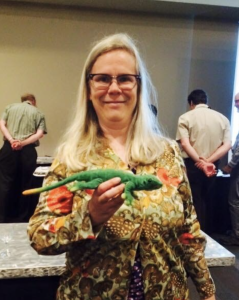 Heather Hallen-Adams found her interest in fungi at an early age, and her course was set when a high school biology teacher was able to tell her 1) that there was such a thing as a mycologist, and 2) there was at least one at the University of Minnesota. Accordingly, she went to U of MN and took as much mycology as she could for her undergraduate, got a PhD and did two post-docs at Michigan State University, and has been Mycologist-in-Residence in the University of Nebraska-Lincoln Department of Food Science and Technology since 2010.  She teaches Molds and Mycotoxins, and Food Microbiology, and participates in Food Toxicology (as well as stealthily sneaking the occasional fungus into Introduction to Food Science) and has served MSA since the mid-2000s on the Student Travel Awards, Student Awards, and Program Committees, as well as Councilor in Cell Biology/Physiology (2016-2018). She has something on the order of 38 peer-reviewed publications, all mycological except for Food fish identification from DNA extraction through sequence analysis, which won her a Tanner Award for most-downloaded paper from the Institute for Food Technologists (go figure). The love-child of Amanita bisporigera and Conocybe apala, Heather also feels deep love and appreciation for her adoptive parents Debaryomyces hansenii and Fusarium boothii.