The Pioneering fungal cell biologist, Nick Read, passed away on March 21, 2020, after a heroic struggle with daunting health conditions. He is survived by his wife Shenda and his daughters, Hannah and Sophie. Nick Read’s lasting impact on mycology ensures that not a British Mycological Society Meeting, nor an International Mycological Congress nor a Fungal Genetics Conference shall go by but he will be remembered for his science, his leadership, and his fellowship.

Read earned his PhD at the University of Bristol with Alan Beckett in 1981 and then stayed for three more years of postdoctoral research. His study of perithecial development (1) is a classic and together with a later review (2) and a recent updating (3) have made it a joy to teach students the details of sexual reproduction for a structure too important to overlook and too small to fully appreciate in a teaching lab.

In 1985, Read left Bristol for a lectureship at the University of Edinburgh and rose through the ranks becoming reader in 1997 and professor in 2005. At Edinburgh, he began to collaborate with the plant cell biologist A.J. Trewavas and produced several seminal and highly cited studies that married light microscopy with dyes that quantified cellular components (4). Read then pioneered the use of these dyes, and others, e.g., FM46-4 and GFP, to study functions as different as vesicle trafficking (5) and nuclear movement (6). In 2001, Read co-founded, at the University of Edinburgh, a multidisciplinary optics center that combined physics, chemistry, and biology with laser photonics and computer imaging. Read’s pioneering studies, often in collaboration with Patrick Hickey (his PhD student turned entrepreneur who founded LUX Biotechnology, Ltd) (7, 8) set the stage for the eye-popping presentations by fungal cell biologists that have become the highlight of plenary sessions at the FGC and ECFGs (and, coincidentally, the Karling Lecture to be given by Greg Jedd at this year’s upcoming MSA Annual Meeting).

Having shown the potential of live-cell, fluorescent dyes, Read then returned to fungal development, discovering conidial anastomosis tubes (9). Here, a collaboration with Louise Glass (10) led to a remarkable series of discoveries in Glass’s lab that unraveled the most basic aspects of fungal signaling and somatic cell fusion (11, 12). What made Read’s talks so compelling was superb science coupled with a presentation worthy of any showman. Read knew how to properly set the stage for a stunning video, like the packs of nuclei rocketing through Neurospora hyphae as if septa didn’t exist (13). It’s remarkable that, despite his struggles with health, he was able to continue to publish, until this year, research that lent his basic approach to translational research (14, 15).

Read the scientist was also Read the leader. He served as the head of two of the most influential mycological organizations, as President of the BMS and as Chair of the Fungal Genetics Policy Committee, the group behind the Asilomar FGCs. He served on the Executive Committee of the International Mycological Association and, from 2006 to 2010, he was Chair of the Steering Committee for the Ninth International Mycological Congress, held in 2010 in Edinburgh. IMC9 remains unsurpassed in attendance, diversity of program, and opulence of social events, including compelling musical performances at the opening ceremony and closing party by his daughter, Hannah, and her musical partner Emma Beaton. 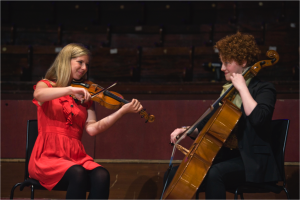 Read’s experience as a leader and his scientific reputation (Fellow of both the Royal Society of Biology and the Royal Microscopical Society) caught the attention of the University of Manchester when they sought a director for their new Fungal Infection Group. In 2013, Read moved from Edinburgh to Manchester, where he and Deputy Director Elaine Bignell, recruited from London, initiated the Manchester Fungal Infection Group, which has become a global force in the study of fungal diseases.

Research and leadership are quantifiable, but it’s fellowship, an unquantifiable attribute, that I remember most vividly about Nick. Whether in an Asilomar fireside room at an FGC, or a pub in Edinburgh at IMC9, or on the town in Amsterdam after a Westerdijk Fungal Biodiversity meeting, I can picture Nick, beverage in hand, holding forth on science, politics, music, the arts, mid-1970s hitchhikes through the USA, or almost any other topic because they all piqued his interest. Here, again, his showman’s timing served him well in enthralling a willing audience. It’s well known that Nick loved mushroom forays and I’m sorry to never have enjoyed one with him. The closest that my wife, Delia, and I came to mycological field work with Nick was a trip to the top of Mauna Kea when the BMS and MSA held a joint meeting in Hilo in 2006. I have a very strong memory of him looking with fascination at the nearly barren landscape, bejewelled with massive optical instruments. It’s in memories, like these of mine and those of a great many others, that Nick surely lives on.