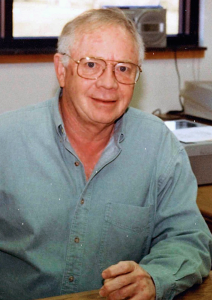 Robert Dean “Bob” Koehn passed away in Austin, Texas, on July 7, 2022, at the age of 90. Bob graduated from Bethel College in Kansas and then went on to complete a Ph.D. from the University of Texas at Austin under the direction of Constantine J. Alexopoulos. His Ph.D. thesis was on the laboratory culture and ascocarp development of the coprophilous fungus Podosordaria leporina (Koehn 1971). Prior to his retirement, Bob was a professor for 35 years at Southwest Texas State University (now Texas State University) in San Marcos, Texas, where he shared his love of mycology with many students. He enjoyed teaching and helping his students succeed and often went above and beyond in helping them reach their goals. While at Texas State University, Bob mentored several undergraduate students and 10 graduate students (M.S.) who pursued mycological research ranging from cellulase enzyme production in Poronia punctata to checklists of fungi inhabiting the San Marcos River and marine habitats of Mustang Island (Port Aransas). Many of his graduate students went on to complete Ph.D. degrees. He left an indelible mark on the lives of so many students. After retirement, Bob moved to Austin and lived there until his death. While living in Austin, Bob was involved with Ducks Unlimited and enjoyed collecting hand-carved duck decoys. He also kept in touch with many of his students after they graduated and started careers, even getting to know their spouses and extended families. (See also Salina Post Obituary)