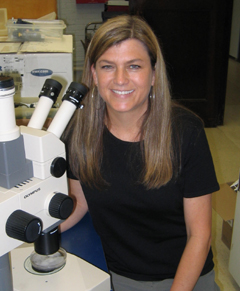 Julia Kerrigan is an Associate Professor in the Department of Plant and Environmental Sciences at Clemson University in South Carolina. The underlying theme in her research is elucidating the basic biology of fungi and their interactions with other organisms. Much of her research has focused on fungi associated with trees, and she has also worked on filamentous fungal biofilms, yeasts, and smuts. While at Clemson she has worked to increase the visibility of the importance of fungi and discipline of mycology. To that end, she has initiated a popular mycology course, Fungi and Civilization, which has reached maximum capacity at 200 students, and teaches Introductory Mycology and Mycology Practicum (lab) to 80 and 40 students, respectively.

Julia has also taught Integrated Forest Pest Management and Fungal Ecology and Pathology, and oversees individualized undergraduate research projects. She earned a BS in Natural Resources from the University of Michigan, Ann Arbor; MS in Plant Pathology from the University of Georgia, Athens under the guidance of Charles Mims; and PhD in Plant Pathology from Washington State University under the guidance of Jack Rogers. She was a postdoc in Jeff Stone’s laboratory at Oregon State University. She values her mycological lineage and appreciates the time her mentors spent to improve her education. She has served on 30 graduate students’ committees and been the major advisor for three PhD and three MS students.