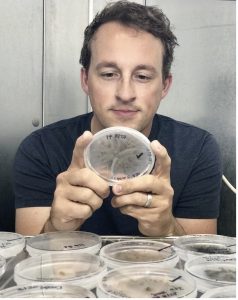 His doctoral work focused on using Verticillium nonalfalfae as a biocontrol against the invasive tree-of-heaven in Pennsylvania. Since 2014, Matt’s primary research has focused on ecology and biology of phytopathogenic and arthropod-associated (both entomopathogenic and mutualistic) fungi. He also has continued his biocontrol work with recent efforts including the use of hypoviruses to control Cryphonectria parasitica, the chestnut blight pathogen.  Ongoing phytopathogenic and insect-associated fungal work includes studies on Cryphonectria, Diplodia, and Neonectria canker pathogens, Fusarium symbionts of Euwallacea ambrosia beetles, fungus-feeding millipedes, and the cicada pathogen, Massospora.

His service to MSA includes Associate Editor of Mycologia (2019 ─ 2021). He is serving as guest co-Editor of a special issue of Mycologia on Animal-Associated Fungi.