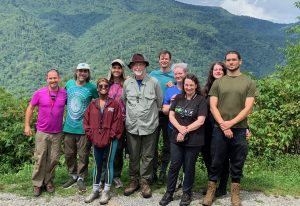 In August and September of 2021, mycologists from the eastern and midwestern U.S. converged in the southern Appalachian Mountains for two separate weeklong research forays. The focus of these trips was to collect Pezizales, a morphologically and ecologically diverse order of Ascomycota that includes taxa that make distinctive cup-shaped, saddle-like, or truffle-like fruiting bodies. The collecting trips were supported by a National Science Foundation grant (DEB-1946445) and are part of a broader research effort to generate resolved genome-scale phylogenies of Pezizales, characterize the trophic ecology for species whose primary trophic mode is unknown or debated, and examine the microbiome of fungal fruiting bodies. These expeditions provided invaluable field training and mycology experiences across generations of mycologists. Over these two weeks in the field, a total of 341 Pezizales collections were made, representing at least 40 genera and an estimated 111 species. Collections were photographed, put into DNA extraction buffers, accessioned in the Florida Museum of Natural History Fungarium (FLAS), and many taxa also isolated in axenic culture. Barcoding sequences (ITS and 28S rDNA) have already been generated for more than 200 collections, with more to come as additional sequencing and phylogenetic work continues. A few highlights of our findings and experiences are described below.

The first Pezizales expedition was 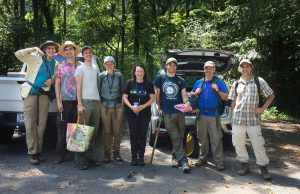 focused on sampling within the Great Smoky Mountains National Park from Aug 11-18th, working out of the University of Tennessee field station near Gatlinburg, TN. The eclectic team covered a broad spectrum of experience and included undergraduates on their first field research trip to an emeritus professor. They included Gregory Bonito and Jud Van Wyk from Michigan State University (MSU); Donald Pfister from Harvard University; and Matthew Smith, Rosanne Healy, Ben Lemmond, Sarah Prentice, Kaori Hall, and Luke Haas from the University of Florida (UF); and Jacob Kalichman and Rachel Sweeney from Brandon Matheny’s lab at the University of Tennessee also joined the group for some collecting and provided valuable guidance on collecting locations.

Daily forays started early in the morning and lasted well into the afternoon. Three to four different habitats or collecting sites were targeted each day, and the team would return to the station by late afternoon to process collections. This consisted of recording data, photographing collections, sampling specimens for culturing and DNA extraction, and identifying key morphological features through microscopy. The station became a classroom as much as a laboratory; we shared techniques for processing field collections and took breaks to peer into the microscope and marvel at our finds. 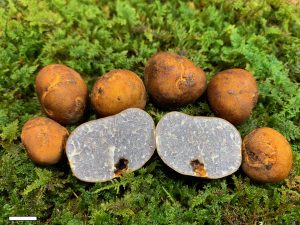 It was soon apparent that the Appalachians were full of Pezizales diversity. For instance, on our first day we collected at least 20 target taxa, including: Adelphella, Chromelosporiopsis, Galiella, Helvella (3 spp.), Humaria, Jafnea, Pachyphlodes (5 spp.), Paragalactinia, Peziza (2 spp.), Scutellinia (2 spp.), and Tuber (2 spp.). But the diversity found on that first day was just a taste of things to come. The diversity of truffle fungi was particularly impressive, and included species of Imaia, Genea, Hydnotrya, Hydnobolites, Tuber, Pachyphlodes, as well as non-Pezizomycete truffles such as Hymenogaster, Hysterangium, Octaviania, Jimgerdemannia, Elaphomyces, and sporocarpic Glomeromycotina. Diverse epigeous cup fungi were also found including Adelphella, Jafnea, Lasiobolus, Paragalactinia, Plicariella, Wynnea, and many more. The only obstacles to collecting were occasional traffic jams within the park, which is the most visited national park in the United States. Despite these occasional snags, by the end of the week we had over 150 Pezizales fungi collections, representing an estimated 67 taxa (and possibly more as sequencing and taxonomic work continues). 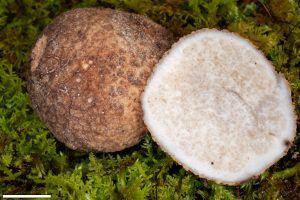 Station in Highlands, North Carolina, which became our home base for this second week of collecting in the Southern Appalachians. The team consisted of Gregory Bonito and Jud Van Wyk from MSU; Matt Smith, Rosanne Healy, Ben Lemmond, and Laurel Kaminsky from UF; Michelle Jusino from the U.S. Forest Service; and Alden Dirks from University of Michigan. With assistance from Maria Dunlavey, a botanist at the U.S. Forest Service, we explored some unique habitats including a serpentine barren, the only limestone bedrock in western North Carolina, and several recently burned areas. A total of 160 Pezizales collections were made during this second week, including an additional 42 taxa that were not collected during our first foray. Notably, a collection of Temperantia tiffanyae was the first record of this truffle outside of Iowa and expanded its known range by about 1,000 miles! 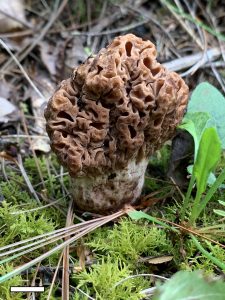 Over the two weeks we collected an estimated 111 species in 40 genera of Pezizales, including many undescribed taxa and many that were considered rare. For instance, Plicariella, an apothecial fungus closely related to the truffle genus Pachyphlodes, has fewer than 20 collections from the Eastern United States listed on Mycoportal. Over the course of our two weeks of collecting, we made 16 new collections of this genus. Imaia gigantea is considered an uncommon truffle in the Morchellaceae-Discinaceae lineage with only 18 collections from the United States listed on Mycoportal, yet over these two weeks of collecting we made seven new collections.  While neither Tuber nor Pachyphlodes are rare genera, we were amazed by the diversity of our collections. In two weeks, we made 62 collections of Tuber and 30 collections of Pachyphlodes, either as ascoma or mitotic spore mats (the anamorphic stage of some Pezizales). Preliminary phylogenetic work suggests that for both genera we collected more species than are currently described from eastern North America. We collected an estimated 17 species of Tuber and 12 species of Pachyphlodes, while there are only 16 species of Tuber and 8 species of Pachyphlodes described for this broad geographic area.

These two collecting trips provided a wealth of material and 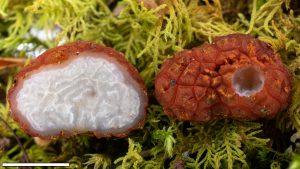 experiences that will continue to generate value for many years to come. For example, cultures from field collections will be used to generate genomes that will phylogenetically place unresolved taxa, while tissues sampled from fresh ascoma of some taxa will be used for comparative microbiome studies, multigene phylogenetics, and isotope sampling. Many specimens from these forays represent undescribed species, furthering our understanding of the diversity of Pezizales on multiple fronts.

All specimen collections will be housed in the Florida Museum of Natural History herbarium (FLAS) for future scientific studies and collection data will be digitized and provided online through MyCoPortal. Meanwhile, these field trips provided an introduction to mycological field research for some, while for others they were a welcome return to fieldwork and in-person collaboration after a long period of isolation. Against this backdrop, mycology forays seem even more important as a reminder of the irreplaceable value of working together and learning from one another, and also of the levity and joy that comes from spending time with people who are both great scientists and great companions. We hope this type of reconnection continues to occur, when it is safe to do so, for the mycological community around the world.