Anyone reading this that knows who I am probably knows me as “the Xylaria guy,” but lately I’ve been working on something completely different: I am currently producing a documentary film about mining and conservation in Ecuador, called Marrow of the Mountain. I was in Ecuador filming for the documentary when the COVID-19 quarantine came down, interrupting our filming schedule and stranding us in Quito. We’re using the quarantine as an editing retreat, and I’m still working hard every day on the film, but the isolation lends itself well to design work as a mental “break” from the film and the constant barrage of news. So, I’ve been designing fungal patterns, with the idea of eventually turning some of them into fabrics or other printed things.

The first one that I drew was this Amanita and Marasmius pattern (below). I’ve always loved the look of vintage patterned fabrics 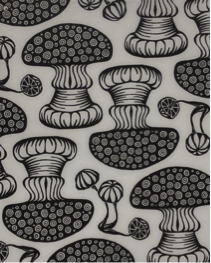 from the 1960s and 70s, and so I set out to try to emulate that look. As a designer, one of the things that’s most distinctive about those old patterns is the way that they don’t repeat on a regular square grid — they drift up or down, interlocking in a manner that defies categorization of the precise repeats. That’s one of my major goals with the patterns I’ve been designing: to recreate that difficulty in defining the boundaries of the repeated elements.

While I’ve been in Ecuador working on the documentary, I’ve had the opportunity to travel to places that I’ve never been to before, and probably never would, just working as a scientist. One of those places was the isolated village of La Unión, deep in the ancestral territory of the Awá indigenous people. The Awá have been especially badly impacted by the rapid mining expansion currently underway in Ecuador, with much of their land initially granted by the government in concessions to international mining companies. After vehement protests, that decision was partly reversed, but the mining companies have continued to operate on their lands, despite the revocation of the concessions and the protests of the Awá about environmental and human rights abuses.

The village of La Unión is hours of walking down a muddy track from the nearest road, only accessible by foot. As we trekked through the forest, touring sites of illegal mining 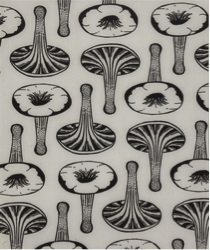 contamination along the river, we also collected the wild produce of the forest — part of the daily lives of these incredible people. While we were staying with the Awá, I ate three different kinds of wild rainforest mushrooms that I had never tried before, including a species of Lentinus (right), which inspired this pattern.

I think we’ve all been spending a lot more time online than typical during the social isolation that has come with this pandemic. I know I certainly have! And that has led to some really interesting coalescences: for example, Fundación Fungi has been doing an excellent interview series on Instagram Live (with guests including María Alice Neves, Bryn Dentiger, Eugenia Bone, and even Paul Stamets). But they also organized the #ffungichallenge, a challenge to make art of 14 species of fungi in 14 days. I didn’t participate fully, but I did a 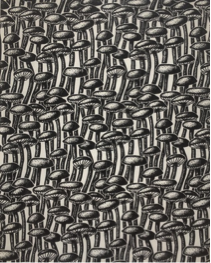 few! Flammulina (left) was one of the first species in the challenge and gave me the excuse to try an overlapping pattern, which I had not thought to do before. If you’re looking for interesting fungal art, or for something fun to do while stuck at home, you punch in the hashtag #ffungichallenge on Instagram and see what comes up, and maybe add your own art to the mix.

Another overlapping pattern, this was inspired by some lovely Phyllotopsis nidulans (below) that I found on a mushroom hike in 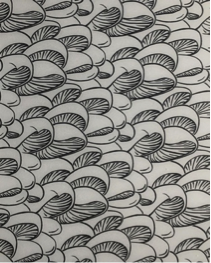 northern California. One aspect of being a professional mycologist that I think catches amateur mycologists by surprise: I am not a great mushroom identifier. I have specialized to an incredible degree, in both the taxonomy of Xylarialean fungi, and in ecology of endophytes. Neither of these specialties lends itself terribly well to general mushroom identification, so when I’m visiting clubs to give talks and there’s some sort of mushroom walk or identification workshop, I always surprise people by how often I say, “I don’t know what that is!” But I think one of the greatest things about science, and particularly mycology, is that it frees us from being embarrassed or upset about not knowing something: anything that you do not know is just an invitation to learn more! Like those Phyllotopsis: they were introduced to me as “Sewer Gas Mushrooms” (an apt name, given the smell), and I’d never seen them before. But I’m happy I know them now — they are incredibly beautiful, and I think I’ll eventually produce a version of this pattern in shades of apricot and sunset, to better reflect that beauty.

My first introduction to mycology was working as a tech in Dr. Brenda Casper’s lab at the University of Pennsylvania, with 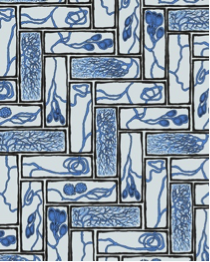 arbuscular mycorrhizal fungi (AMF) (left). That experience (part of which was getting to know Dr. Sydney Glassman, while she was a master’s student there) helped to push me into mycology, and was influential in my future research directions. I continued to study AMF during my PhD and have spent literally thousands of hours looking at these structures under the microscope: I find arbuscules — the tiny tree-like structures that the Glomeromycetes make to facilitate nutrient exchange with their plant hosts — endlessly fascinating. For this pattern, I wanted to start with a traditional pattern as the basis: a herringbone. Once I’d sketched in the shape of the pattern, I couldn’t help but see them as plant cells, and so the mycorrhizal hyphae followed naturally. This was also one of the first attempts to use color to enhance the pattern: AMF are often visualized by staining with Trypan Blue, so that was the color I used here.

I am currently missing spring while stuck in quarantine in Ecuador. I didn’t mind missing the winter to be here filming, but I am unhappy that my stay for 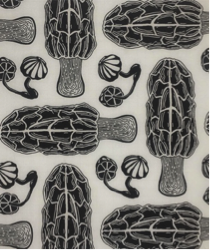 the lockdown has cost me much of the early morel season. My social media feeds have been full of people’s incredible hauls of spring morels. I find the shape and form of morels endlessly fascinating, and really enjoyed the challenge in creating a design that was clearly a Morchella (right), but was also nearly symmetrical, something that never occurs in nature.

After the arbuscular mycorrhizal pattern, I wanted to try replicating some other traditional patterns with a fungal twist. This is, I think, one of the most successful: a houndstooth composed of fungal spores! 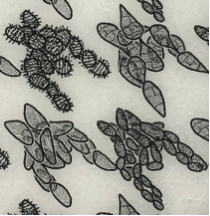 Houndstooth is fascinating from a design perspective because the light and dark elements are exactly the same shape, interlocking and connecting into a regular pattern like no other. I replicated the pattern by creating the dark areas from piles of spores of various dark-spored fungi (Alternaria, Cladosporium, Xylaria, and Russula), and then interconnected them so that the white spaces between would hold the same shape as the spore piles.

Last, but certainly not least, a paisley created from various fungal structures, both macro- and microscopic. How many can you name? Some of you may know that I have been mildly 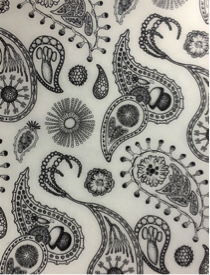 obsessed with the idea of fungal paisley for quite a while. I designed a fungal paisley years ago, as I was finishing my dissertation research, which became the pattern for my sleeve tattoo (my graduation present to myself), and it feels good to have designed another, as intricate and complex as the previous one.

Paisley has a complicated, and fascinating, history. The original design is Persian, from what is now Iraq. The basic shape, like half of a yin-yang, originally represented a cedar of Lebanon tree, bending but not breaking. This was a symbol of strength but modesty in Zoroastrian tradition, and was picked up by Persian resistance fighters, including the royal family, during the period when Persian was being invaded by Islamic forces from the south. After Persia fell, the pattern became popular across the Middle East and India and was brought back to Europe by returning crusaders. In the late middle ages, Scotland was a center of textile manufacture, due to the prominence of sheep herding in the region, and the craftspeople of the day began to replicate the pattern. The name “paisley” derives from the town of Paisley on the west coast of Scotland, still a center of textile manufacturing today. It saw a resurgence of popularity in the 1960 counter-culture (think Jimi Hendrix), and I find it pleasingly synchronistic that the pattern has been used to represent resistance to dominant cultural forces and the fight for freedom of expression throughout the centuries. I see this fungal paisley is a continuation of that tradition.

Part of my motivation with this design series is the fact that there are literally innumerable floral — and otherwise botanical — patterns, but it is very, very difficult to find fungal patterns. I think that should change. I hope you’ve enjoyed these, and if you’re interested in buying fabric or other goods with some of these patterns, stay tuned: as soon as I’m back in the States, I intend to get started on making that happen!

Bio: Roo Vandegrift, PhD, is a queer scientist and illustrator from Eugene, Oregon. He received his doctorate in mycology from the University of Oregon’s Institute of Ecology and Evolution. He works on the ecology and diversity of fungi in northern Ecuador, and is currently producing the forthcoming documentary film Marrow of the Mountain.