In 2018 the New York Times developed a project to publish obituaries for individuals who had been overlooked at the time of their deaths (see https://www.nytimes.com/interactive/2018/obituaries/overlooked.html).

Because some mycologists also may have been overlooked, any MSA member is invited to submit a memorial for an overlooked mycologist for publication in Inoculum. Please submit memorials to MSA Memorials, Editor, Meredith Blackwell mblackwell@lsu.edu. The series “Never Too Late,” begins with the first in a series of memorials, this one about Thelma Perry, a mycologist with a remarkable story. 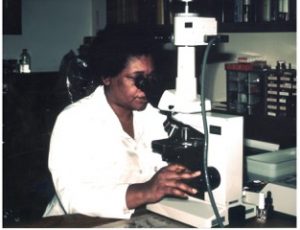 Thelma Perry, obscured by her microscope, a photograph hanging in the lab of her colleague John Moser at the time of his death. Secured by Brian Sullivan, date and photographer unknown.

Thelma Perry studied fungi and her story is a monument to determination. An African American, she was born (April 30, 1941) and reared in Birmingham, Alabama. In addition to Thelma and her parents, James H. and Inez Perry, her family included four brothers and three sisters. After she graduated from Holy Family High School (currently known as Holy Family Cristo Rey Catholic High School), she attended Xavier University, probably in New Orleans, although a record is not available, perhaps because she did not complete a degree. When Thelma was 37 years old, she returned to school and completed a Bachelor’s degree in biology at Louisiana College (1978), a private Baptist college in Pineville. By this time, she already had begun working as a biological laboratory technician at the US Forest Service, Southern Forest Experiment Station, Alexandria Forestry Center, Pineville, Louisiana.  Her only formal mycological course came even later, an online course offered by Dr. Bryce Kendrick for which she collected her own lab specimens.

Along the way, Thelma focused her search image on microscopic fungi, and she learned to spot obscure clues leading to the recognition of myriad fungi growing in the tunnels of beetles and fissures in bark. Although known by few members of the Mycological Society of America because she attended only one meeting (Ottawa, 1987), Thelma was a proud member and avid reader of Mycologia as well as all primary literature on bark beetles and the fungi they carried with them. (She coauthored a bibliography on the topic.) She worked diligently at the Pineville lab conducting experiments with bark beetles, isolating fungi, and mentoring high school students in summer programs at the lab. She was active in increasing diversity in what then was a field dominated by white males. She wrote a proposal to provide research experiences for women and minority students in use of DNA to determine inter- and infra-specific differences among the fungi. Her highly independent activities brought recognition from the Forest Service, and Thelma was promoted at some point to Microbiologist, a professional position in the Forest Service.

Thelma investigated fungi that dwell primarily in the galleries and mycangia of scolytid bark beetles. She discovered the fungus (Pyxidiophora kimbroughii) that “produced Thaxteriola,” at a time when Thaxteriola was thought to be an entity of its own and not a conidium-bearing dispersal morph derived from an ascospore. This discovery eventually provided the clue to answer the hundred-year old mystery of the origin of the 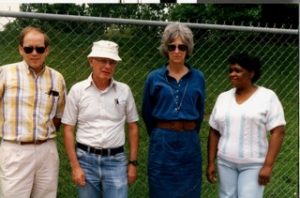 Laboulbeniales. In Thelma’s hands, cold nurtured, southern pine beetle-ridden bolts of slash and loblolly pine yielded a species of Entomocorticium sp. with flat-topped gastroid-type sterigmata, several years before the genus was independently discovered and described from Canada [Whitney HS, RJ Bandoni, Oberwinkler F. 1987. Entomocorticium dendroctoni gen. et sp. nov. (Basidiomycotina), a possible nutritional symbiont of the mountain pine beetle in lodgepole pine in British Columbia. Canadian Journal of Botany 65:95–102]. She saw the glistening heaps of its basidiospores accumulating in beetle galleries. Thelma described other associates of bark beetles with her Forest Service colleagues. These included a common ascospore-producing associate of the southern pine beetle, Ceratocystiopsis ranaculosa Perry and Bridges, and an associate of the black turpentine beetle that occurs commonly in roots of dying pines, Leptographium terebrantis Barras and Perry.  She also found Pezizella chapmanii (or something close to it) in infested pine bolts. She showed us Hyalopycnis sp., a remarkable pycnidial basidiomycete, which she identified (using an early edition of HL Barnett’s spiral bound Illustrated Genera of Fungi Imperfecti) from southern pine beetle galleries before it was reported from Canadian beetle galleries. Thelma remarked on the superficial similarity of the pycnidia to that of the light colored, ascospore-oozing perithecia in the galleries and hypothesized about adaptations for arthropod dispersal. Thelma discovered and diagnosed fungi in beetle galleries in Louisiana that had close relatives associated with Canadian beetles, a remarkable feat for a self-taught mycologist working alone and unknowingly pitted against several eminent mycologists.

Thelma was one of the first scientists to explore the morphology and mechanisms that sustained the remarkable symbiotic relationships between Dendroctonus bark beetles (the most destructive pests of conifers in North America) and the mutualistic fungi that they carry between hosts in their mycangia.  With Forest Service colleagues, she characterized both the structure and contents of the mycangium of the southern pine beetle. This work resulted in the first discovery of a basidiomycete mycangial associate of a bark or ambrosia beetle. They discovered that the mycangium is split into two bilaterally symmetrical “pouches” on the pronotum of the insect; this structure maintains both the basidiomycete and a second ophiostamatoid symbiont (O. ranaculosa) separate and in pure culture. Thelma observed that mycelium grew from the mycangia of dead beetles but not live insects, providing evidence that beetle-produced secretions sustained the fungal propagules in a form specific to the mycangium and adapted for transport and dissemination. The apparent exclusion from the mycangia of weedy fungal species present in nearby parts of the beetle galleries suggested antimicrobial effects of mycangial secretions. These studies formed the foundation of a major body of research subsequently pursued by numerous laboratories into the relationships of Dendroctonus with their symbionts, resulting in major discoveries advancing our understanding of insect-fungus symbioses.

Thelma had an exceptional eye for detail and was a meticulous observer of bark beetle-fungal relationships. Unfortunately, it seems that most of her observations and associated hypotheses were never pursued further or published due to her laboratory’s emphasis on applied studies. With her intuitive knowledge and detailed observations, Thelma recognized many new and unusual fungi and was generous in helping other mycologists to benefit from her observations. Early in their graduate studies in 1992, one of us (Sullivan) had the magnificent experience of visiting with Thelma in her lab for two days with no purpose other than learning as much as he could from her extensive observations of bark beetle-fungal symbioses. “I was overwhelmed as I had never before (or since) spoken with a mycologist with such detailed knowledge of the topic or a willingness to take the time to share it.  When I incorrectly addressed her as ‘Dr. Perry’ (I could not imagine that someone with her knowledge and passion would not have a PhD), she chuckled and said, ‘Oh no! I am just a microbiologist!’ During that visit, Thelma provided me with written notes of her observations, hypotheses, and research directions that – if given the opportunity – she wished to pursue. I think it is remarkable she gave these to me, as it is more often typical for scientists to be highly protective of such information.” Exactly when Thelma wrote these notes is not known, but the four files of 3-4 pages each, five photographs, and other biographical material will be submitted to the Hunt Institute for Botanical Documentation. Her intended studies were to investigate how mycangia of the southern pine beetle become inoculated (still unknown); how to refine methods of culturing beetles with empty mycangia for studying beetle dependence on mycangial fungi; the possible functions of mycangial glandular secretions; and whether the beetles remaining in bark stripped from infested trees by woodpeckers might emerge with fewer phoretic mites carrying deleterious Ophiostoma minus.

Thelma stoically endured many personal problems in the last fifteen years of her life, including the drowning death of an infant grandchild, the complete destruction of her home by fire, an injury to a son that left him a paraplegic, and finally a six-year fight with cancer that caused her death February 10, 1998, almost exactly twenty-four years ago. She is buried in the Carver Memorial Gardens Cemetery, Birmingham. At the time of her death Thelma was survived by her parents and seven siblings (many still living in Birmingham), two sons, a daughter, and six grandchildren [Anonymous. “Obituary for Thelma Perry (Aged 56).” Alexandria Town Talk Obituaries, February 13, 1998].

Thelma enriched our lives by her devoted friendship and good humor, and she enriched our mycology by revealing hidden fungi in the beetle-inhabited wood that she knew so well. The interests of one of us (Meredith Blackwell) were, in large part, a continuation of what Thelma taught her.  She is acknowledged in a paper dedicated to her (Blackwell M, D Haelewaters, and DH Pfister. 2020. Laboulbeniomycetes: Evolution, natural history and Thaxter’s final word. Mycologia 112:1048–1059). More recently Entomocorticium perryae was named in her honor (Araújo et al. 2021. Diversity and evolution of Entomocorticium [Russulales, Peniophoraceae], a genus of bark beetle mutualists derived from free-living, wood rotting Peniophora. Journal of Fungi [Basel]. 7[12]:1043). Thelma has our everlasting gratitude.